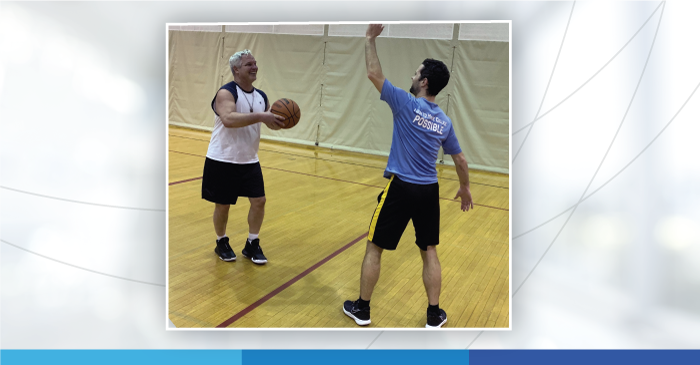 Michael Dunn is not your average orthopaedic patient. On one hand, having never had surgery, he was the most inexperienced. On the other hand, as a Ph.D. in biomechanical engineering, he can easily name every cutting-edge material that comprises the artificial hips that have given him back a pain-free life.

Dunn, a 60-year-old professor and Manalapan resident, is also a faculty member in the Department of Orthopaedic Surgery at Rutgers Robert Wood Johnson Medical School. In general, he has been blessed with good health and has lived an active life. A baseball player from childhood through college, he has kept up with adult softball leagues, and regularly enjoys golf and competitive basketball.

However, when he was 55 years old, Dunn began to suffer from hip pain. Eventually, he made an appointment with Dr. Charles Gatt of University Orthopaedic Associates (UOA), a colleague at the medical school. By Dunn’s description, Dr. Gatt suspected he probably had a synovial issue that could be dealt with by an injection of cortisone. However, they were both in for a surprise when they saw Dunn’s X-rays. As Dunn tells it, “Dr. Gatt is not a guy who curses, but he took one look and said, ‘Holy —–; are those your X-rays?’ He couldn’t believe it.” Neither could Dunn.

Both of Dunn’s hips were significantly damaged by osteoarthritis.  He knew that the accompanying deteriorated cartilage that connects and protects the joints does not regenerate.  He wasn’t surprised, then, when Dr. Gatt told him that in two to five years, he would certainly need hip replacement for both hips. “I love to play full-court basketball,” Dunn says, who also plays in a Rutgers golf league. “Exercise is supposed to be good for you. I wondered how this could have happened.”

Dunn spent the next two years in a state of “grin and bear it” when it came to his hip pain. “It went downhill fast and furious. It was no way to live,” he relates. Although he pushed himself to take trips with his family, he reveals that “it was torture just to walk.” What’s more, he didn’t want to live on the over-the-counter painkillers he resorted to taking.

I’d Use the World Miraculous

New hip X-rays showed that the situation had worsened—his hips were virtually bone on bone. In addition, Dr. Kayiaros noticed that Dunn’s hips were misaligned. It turns out that Dunn had congenital hip dysplasia in both hips, a condition in which the ball in the “ball and socket” hip joint does not fit together properly.

Michael Dunn had never been a hospital patient since the day he was born, so with all the pre-operative and recovery considerations, and being understandably nervous about his first time having surgery, he asks rhetorically, “Who would want to go through that twice?” So he decided to do both hips at once. “Go big or go home!” he concluded.

On January 9, 2019, Dunn underwent a double hip replacement via the anterior approach. After an overnight hospital stay, he was up the next morning moving with a walker. Despite slight irritation from the incision site, he says relief was immediate, “’Wow, my hips don’t hurt anymore,’ I realized. I could tell the difference right away. I’d use the word miraculous.”

Following surgery, he was sent home with a prescription for opioids to manage pain. “I didn’t take a single one,” he says proudly, “The pain was gone. What did I need those for?” He followed all the post-operative directions meticulously to enable a good outcome. With the guidance of a physical therapist and a nurse, Dunn began by walking around the house combined with elevating his legs. After a few days using a walker, he graduated to a cane, and within a week and a half, he was walking for the most part without aids. Following this introductory recovery, structured physical therapy helped him work on additional balance and strength.

By spring, he was back to playing in his golf league. “I could actually rotate my hips and widen my stance, which I couldn’t do before,” he reports of his golfing. Right after Labor Day, and after consulting with Dr. Kayiaros, he was ready to go back to the gym.

As part of the medical school faculty, he encounters all the residents, of which Dr. Kayiaros was once one. “I always knew he was an intelligent guy,” he says of his surgeon. Dunn had faith in his skill, talent and conservative approach to care—recommending surgery only when it is completely appropriate–because of the training he knows medical students receive at Rutgers Robert Wood Johnson. Dunn says of Kayiaros, “He was very straightforward, explains everything well, and has a good bedside manner and good sense of humor. He’s a regular guy who happens to be an orthopaedist.”

“I probably waited too long to have the surgery,” concludes Dunn.  “Who wants to go under the knife? So, I would grin and bear it. If anyone asks me now, I say I wish I would have done it at least a year earlier.” He tells anyone who thinks they need it to get the surgery done. “It’s life changing.”

Michael Dunn has his game back, and his life. “Something I really enjoy had been taken away from me,” he says of his sports. “It’s not just physical fitness; it’s mental fitness.”

Now, every time he sees Dr. Kayiaros, who is also a clinical assistant professor in Dunn’s department, interviewing prospective residents, he gives the doctor his highest compliment. “This is the guy who got me back onto the basketball court!”