Back in “Rock and Roll” Shape

Back in “Rock and Roll” Shape 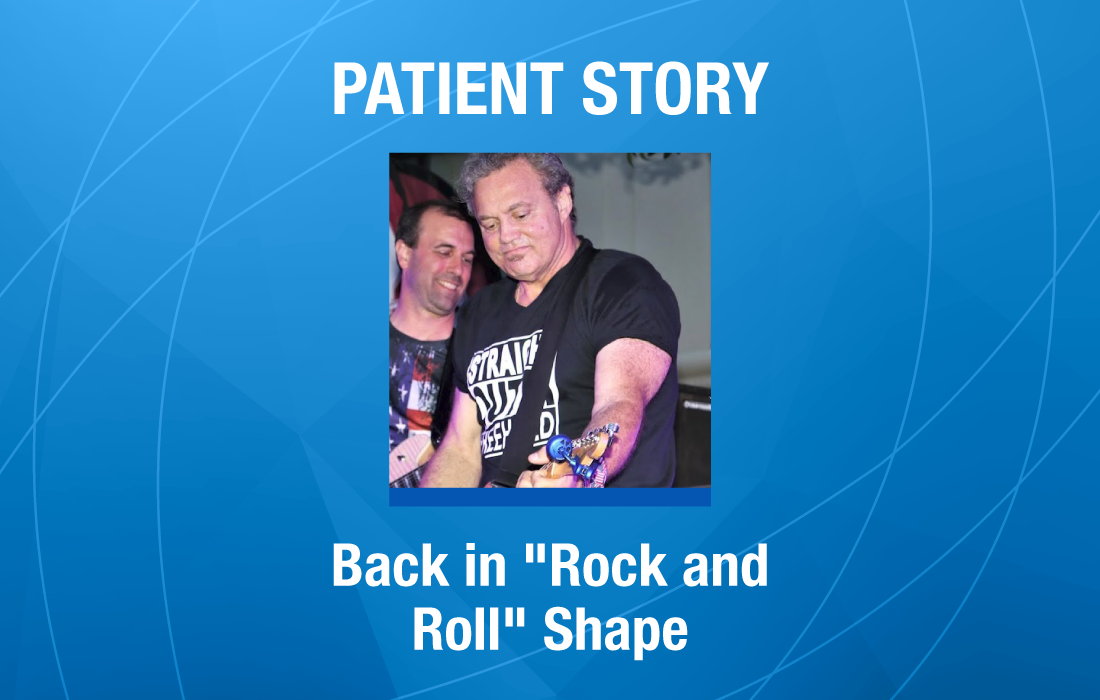 The total package. That’s how Eddie Testa describes his band, The Eddie Testa Band, on its website.

The phrase can easily be said about the 61-year-old Testa himself.  He is a restaurant owner, lifelong musician, and is still performing in the Bruce Springsteen tradition of Testa’s native Freehold, New Jersey.

In fact, Eddie Testa is usually on his feet all day long. First, at Chicken Town in Toms River, a restaurant he has owned for the past 25 years, and then “jumping around playing music like I’ve done since I was 14,” he says.

He loves what he does. But it got more challenging starting about seven years ago. “It got harder to get up and down the stage while carrying equipment for the band,” Testa says.

“I never knew what it was,” he says about the cause of the pain. “I honestly never had the chance to take the time to take care of myself. When you have other people counting on you to make money, you can’t just take off.”

But the pain steadily increased in the past three or four years. When it got to the point that Testa struggled to get in and out of his car and could only drive by sitting sideways on his good hip, reality caught up to him.

He vowed: “This is the year I take care of myself.”

Finding an Answer with the Help of a Fan

Testa knew about hip replacement through his band’s bass player, who had gotten his done and was functioning well. Testa was scheduled to go to that friend’s doctor, but in the meantime, fate intervened.

His wife had begun researching anterior hip replacement. By a stroke of luck, three weeks after making his original appointment, Testa was chatting with fans, among them UOA administrative assistant Regina Taggert.

“You should come and see our doctor,” Taggert told Testa. She was referring to Dr. William Baione, whom she told Testa used the anterior approach.

Testa was sold on the direct anterior total hip replacement, which is a muscle-sparing approach with smaller incisions that results in less tissue damage, less post-operative pain, no hip precautions and a faster recovery. It also entails a shorter operation.

When Dr. Baione saw the extent of Eddie Testa’s hip, the orthopaedic surgeon told him, “I don’t know how you’ve been living with this.”

Testa says Dr. Baione told him it was one of the most drastic hips he’d seen: bone on bone changes from the worn cartilage with complete collapse of the femoral head and very large bone spurs restricting his motion. In fact, Testa heard a clicking noise coming from his hip every time he moved.

“I loved Dr. Baione,” proclaims Testa. “First of all, he is very patient. He explained the whole process so thoroughly. I was amazed by his personality and his character. I felt comfortable being there, and comfortable proceeding with the process.”

Prehab and Rehab All the Way

Eddie Testa is particularly proud of how he prepared himself for surgery. He believes it was a significant factor in his speedy recovery. Although he was not particularly heavy, he dieted to lose 24 pounds and did physical conditioning.

“I took care of myself going in, and I had a great mental attitude,” he says. “I think those things were key.”

His surgery was on April 8, 2019. Dr. Baione, he says, “did a fantastic job.” By the afternoon of the surgery, Testa was walking the hospital halls. He began therapy, was released the next day and continued rehab at home.

When Testa opened the door to the physical therapist two days after surgery, the therapist asked him, “No walker, no cane”? Testa proudly replied, “I don’t need them.”

A week after surgery Testa returned to his restaurant, working two consecutive 12-hour days, and then “took it easy” the next three days, quitting work by 5 p.m.

“I would recommend Dr. Baione to anyone,” says Testa. “He’s a fabulous, knowledgeable doctor who knows what he’s doing. I’m evidence of that.”

The Band Is Back!

When it came to resuming his musical career with the band, Eddie Testa admits, “I didn’t know how my body would react.” So, he was cautious. At the restaurant he says, if work gets slow, he can sit or lean against something. “But in the band, we do a three-hour set straight; we don’t stop,” he explains. “You’ve got to be in what people call ‘rock and roll shape.’”

On May 3, just shy of a month from his surgery, Eddie Testa was back with his band. They played a gig in Seaside Heights. “It was business as usual”, he says.

“I was amazed at myself,” says a joyful Testa. “We hit the first song, and the whole night, I didn’t break a sweat. I moved like I did when I was 15 years old. ‘Elvis is back in the building, my friends!’ I told the guys in the band.”

Their first song that night? Grand Funk Railroad’s Some Kind of Wonderful, an early line of which, no doubt, Eddie Testa sang loudest and clearest of all.

“I got everything that a man could want.”